Since early Monday, December 1, of a presumed 420 people who have arrived on Yemen’s shores after traveling through the Gulf of Aden from Somalia, Doctors Without Borders/Médecins Sans Frontières (MSF) has assisted 361. 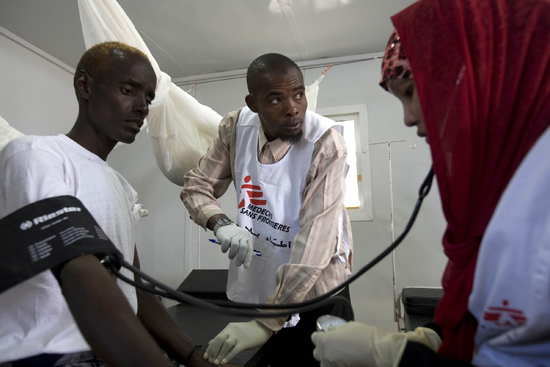 An MSF team provides medical care to the survivors of two boats that landed on the Yemeni coast.

Since early Monday, December 1, Doctors Without Borders/Médecins Sans Frontières (MSF) has assisted 361 of a presumed 420 people who have arrived on Yemen’s shores after crossing the Gulf of Aden from Somalia on dangerous smugglers's boats.

At least 24 people in the first wave of refugee and migrant arrivals this week did not survive the trip, and most of their bodies were collected from the beach in Ahwar, Yemen. Two additional bodies were discovered on the beach today, bringing the confirmed three-day death toll to 26. 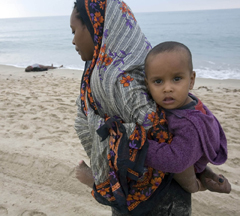 A woman walks the beach with her nephew, looking for the child's mother after landing on Yemeni coast.

The earlier wave of arrivals, 195 refugees and migrants, made the journey in two overcrowded boats that disembarked from the port city of Bossasso in the Puntland region of northern Somalia. People were forced overboard by the smugglers approximately 400 meters from the Yemeni shore. Some survivors were treated by MSF for knife wounds. The smugglers stabbed them when they refused to jump from the boat while still in deep water far from shore.

Sixty percent of the survivors came from Ethiopia, with the remainder from Somalia.

Today, a presumed total of 225 people arrived along several hundred meters of shoreline near the village of Melha, after disembarking from two smugglers’ boats that had left northern Somalia two days ago.  MSF teams provided assistance to 197 people; the others fled to avoid potential detention by the authorities.  All of the passengers survived.  People were provided with medical care, water, food, and relief items.  They were then transported to the United Nations refugee center in Ahwar, where MSF medical staff carried out further treatment and consultations.  The vast majority of the people who arrived today—83 percent—were from war-torn Somalia.

Boatloads of people routinely arrive on Yemen's southern shores. The majority of the passengers are usually Somali people fleeing war and persecution at home. Some Ethiopians also report that they are fleeing persecution and violence in some areas of their country. Since the beginning of the year, 350 people have died attempting the journey; the figure is probably too low since some bodies are lost at sea and others a buried quickly and unannounced by local villagers.

A one-and-a-half year-old boy reached the shore with his twenty-year-old aunt. They had set off from Bossaso with the boy's 24-year-old mother after journeying from the Oromo region of Ethiopia to northern Somalia in search of a better life in Yemen.

The boy's aunt searched the beach in vain for her sister, who apparently did not survive after being forced from the boat. Seven hours later, Yemeni fisherman found the boy's mother in the water, miraculously alive.

Twenty-four hours after her ordeal she was confused, exhausted, and could barely walk. "Yesterday I was in the sea," she whispered. "I don't know how I was saved. Only today can I talk. I don't know where I am right now, but I would like to go to Yemen."

Since the beginning of 2008, MSF teams in southern Yemen have treated over 8,000 people who have arrived by boat. Survivors are provided with immediate medical assistance on the beach and are given dry clothes, water, and nutrient-fortified foods. They are then transported to a United Nations reception center in the town of Ahwar, where MSF operates a medical clinic and provides counseling services. MSF began its project in southern Yemen in September 2007.