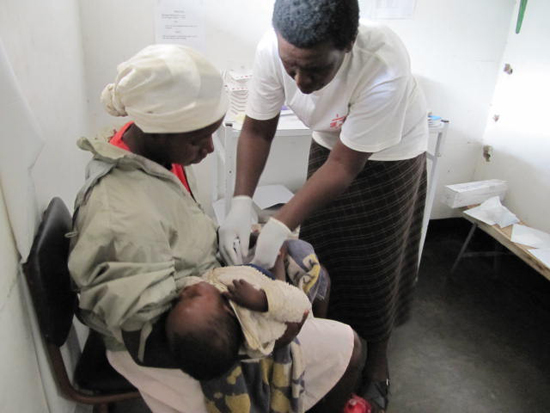 MSF staff tests a child for HIV at Bubude Clinic in Tsholotsho District, where MSF is helping the Ministry of Health decentralize HIV/AIDS treatment and the Prevention of Mother-to-Child Transmission (PMTCT) program.

It’s Easter in Zimbabwe, and women are flocking to rural clinics to get contraceptives. Men are coming back from South Africa to spend the holidays at home. Women know their husbands have sexual partners in the neighboring country. They also know that injectable or oral contraceptives won’t protect them from HIV and sexually transmitted infections. But at least they prevent unwanted pregnancies and save innocent lives from the deadly virus.

“I’m afraid of my husband. He knows I’m positive but he lives in denial. And he has threatened with killing me if I bring condoms home,” a woman tells a counselor.

“I cannot bring my children for testing,” says another woman who has tested positive and has been counseled to bring her children in to be tested as well. “I’m scared. If my children are positive too, that’s the end of my marriage.”

Tsholotsho is a rural district in west Zimbabwe, bordering Botswana near Victoria Falls. It is an agriculture-based society and there is no industry, apart from a small timber business.

The area is prone to drought, so many people, especially young men, go to South Africa in search of jobs and better salaries. Women stay behind, keeping the house, raising the children, and suffering in silence.

In this patriarchal society, the health of a woman is a family business; women need the husband’s permission to go to the doctor.

In his absence, it is the female in-laws, mother or sisters, who make the decision. Women are therefore often both victims and executioners of their own repressive fate.

HIV awareness-raising activities in the communities are paying off. When women believe their husbands are indulging in risky behavior, they go to a clinic to be tested. But then, it is not easy to disclose a positive status to the family, let alone to negotiate with the husband to have safe sex.

“The woman will be accused by the in-laws of bringing the disease into the family, as the husband is working in South Africa, and will be stigmatized,” said a nurse in the Doctors Without Borders/Médecins Sans Frontières (MSF) Voluntary Counseling and Testing (VCT) center in Tsholotsho.

“Women don’t talk about sex with their husbands. It is commonly believed that men know more about sexual issues than women. If they do, men will consider their wives are having extra-marital affairs and that would be the end of the marriage.

“One needs a lot of courage to come out," she said. "Even financial and educational empowerment do not help to challenge the husband.”

HIV is the major reason for consultations in Tsholotsho District Hospital (TDH). According to MSF’s consultation records, the positivity rate of HIV tests done in the health facilities is close to 30 percent.

Among pregnant women, the positivity rate of HIV tests done at antenatal care consultations is around 23 percent, well above the national estimate of 16 percent for this population group.

Perhaps because they are the ones actually taking care of the family, and probably because they have the responsibility to bear and bring new lives into this world, women are more conscious of the risks of HIV and the benefits of an early diagnosis.

Most men, on the contrary, prefer to live in denial.

What it is even worse, knowing their positive status and taking antiretrovirals (ARVs) themselves in South Africa, they prefer to hide it from their spouses and family, and practice unsafe sex with their partners at risk of infecting them and the newborns.

Men’s denial can go as far as being brought back very sick from South Africa and being dropped, terminally ill, at the hospital’s door. This is not an unfamiliar scene in TDH.

Nurses and counselors say people are now more aware about HIV because they have witnessed their relatives getting sick and dying, or getting treatment and having a productive life.

A lot of awareness-raising activity is being done among chief elders and religious leaders who have a powerful influence in the community’s social and cultural practices.

“The change of behavior is coming slowly,” said an MSF nurse in the Prevention of Mother-to-Child-Transmission (PMTCT) program in Tsholotsho. “It is not an easy road, but there is light at the end of the tunnel.”

Rufaro* is a 26-year-old mother of two babies. She delivered her second baby less than a year ago in the clinic of Luveve, in Bulawayo City. Apparently, both mother and baby were healthy and looked healthy.

But soon after, Rufaro felt so sick, she had to go to TDH. She was advised to take an HIV test and was shocked when she learned she was positive. In the light of the outcome, she was advised to test her newborn.

Again, she was horrified when the baby tested positive as well. But she felt so sick and confused that she barely understood what the doctor and nurses were telling her to do to help the baby.

Fortunately, her first baby tested negative. Today, Rufaro is coming to Bubude, a rural clinic in Tsholotsho District. She wants to have her blood taken for a CD4 count, as well as her baby’s dry blood spot taken for a DNA PCR testing, a technology used for early infant HIV diagnosis.

The MSF nurse looks concerned. According to the baby’s health card, the test was carried out a few months ago but the mother has no idea where the official results can be.

“I was so confused,” Rufaro apologizes. Nevertheless, dry blood spot samples are taken from the baby. But he looks sick and the nurse advises the mother to take him to TDH as soon as possible for a consultation with the doctor.

Rufaro looks resigned. She is employed to take care of a house while the owner is working in South Africa but has no money to take the baby to the hospital until she is paid. That may only happen when the boss comes back. Perhaps next week.

There  is just one Ministry of Health doctor for a population of 129,000 people in Tsholotsho district.

Nurses are manning the 17 rural clinics and the doctor, who happens to be the District Medical Officer as well, needs to divide his time between all his responsibilities, including the consultations in the hospital.

Generally, outpatient consultations in clinics are overcrowded. Pregnant women who test positive and need to be enrolled in the PMTCT program don’t have enough time to talk to healthcare staff to understand and cope with all the information that goes with it in a moment of total distress.

In an attempt to overcome this barrier, MSF has helped set up a Mother-to-Mother program in neighboring Bulawayo, a city less than two hours away from Tsholotsho.

Based on volunteer work, positive women who have already gone through the PMTCT program act as mentor mothers to provide peer support and first-hand experience to women newly enrolled in the program.

The result is so positive that MSF is planning to replicate the scheme in Tsholotsho.

“I learned I was positive when I got pregnant," said Roselyne* an HIV-positive mother of a seven-year-old girl.  "I didn’t want to accept it. I disclosed it immediately to my husband because I felt so angry. But he didn’t accept it either. Even worse, he didn’t understand the PMTCT program. I was alone in the whole process and I went through denial for a long time before accepting my status.

"Concerning my husband, he lived in denial until he got very sick. He started late on ARVs and passed away a year ago,” she said.

Roselyne and many others feel their support and experience is important.

“Now mothers can accept their status more easily as they can see women who have gone through the same situation,” she said.

“When we visit mothers, we also ask for the husbands, so that we can talk to them. Male involvement in the PMTCT program is important, although at present less than 18 percent are involved.

“Men listen to women, but it would be more effective if men talked to them. They believe they can’t be told anything by women.”

A dreadful nightmare is haunting these women, though. “After successfully saving our babies from an HIV-positive destiny, we fear they will be infected when they become adolescents. It is a scary thought,” said Roselyne.

Aiming at facilitating universal access to HIV treatment and care, MSF is working in 13 out of the 17 rural clinics in Tsholotsho District as well as in TDH, helping the Ministry of Health to decentralize the ARV treatment and the PMTCT program.

Early Infant Diagnosis (EID), available in the district since October 2009, was decentralized to all the 17 rural clinics in February 2011. Samples of dry blood spot are sent to Harare for DNA PCR.

This system is relatively easy to use in rural areas. Still, children can only start ARV treatment in TDH but uncomplicated cases can be followed up in the six rural clinics that provide this service.