How we’re helping in Afghanistan

How MSF is fighting COVID-19 in Afghanistan

We closed our Gazer Gah COVID-19 center in Herat in March. From December to March, the facility treated a total of 349 patients. Activities continue at the COVID-19 triage unit in Herat regional hospital. In Helmand, we are continuing the referral of suspected COVID-19 patients to Malika Suraya hospital. MSF is working with the Ministry of Public Health to provide treatment and hospital care for four categories of patients infected with COVID-19 (people suffering from tuberculosis and surgical, pediatric, and maternity patients).

In our drug-resistant tuberculosis center in Kandahar we are caring for DR-TB patients infected with COVID-19. In Khost, female caretakers are allowed back into the maternity wards but only during visiting hours. Regular weekly health promotion visits to the five MSF-supported community health centers in the districts have resumed.

More than 40 years of conflict and instability have left Afghanistan’s economy and infrastructure in ruins, with many people dependent on humanitarian assistance.

What is happening in Afghanistan?

The crisis in Afghanistan is characterized by upsurges in conflict, recurring natural disasters, widespread internal displacement, very low health indicators, extreme poverty, and an overburdened and underfunded health care system. In 2019, presidential elections and peace talks between the US and the Islamic Emirate of Afghanistan (IEA), better known as the Taliban, led to renewed violence, which had a severe impact on people’s access to health care. It is estimated that around one-third of the population does not have a functional health center within two hours of their home. 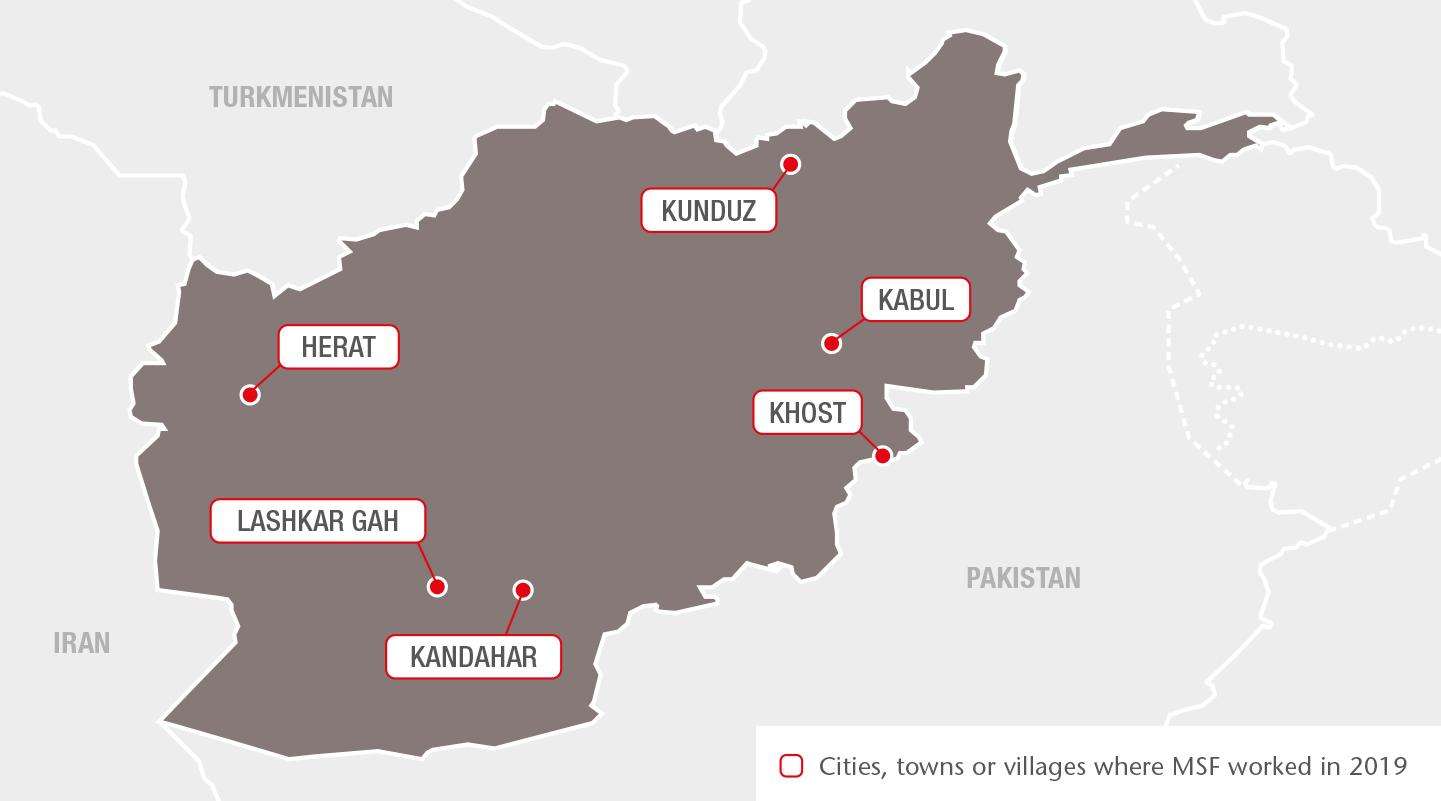 How we’re helping in Afghanistan

Doctors Without Borders/Médecins Sans Frontières (MSF) ran six projects in six provinces in 2019, with a focus on emergency, pediatric, and maternal health care.

The Ahmad Shah Baba project in eastern Kabul was the first one we opened when we returned to Afghanistan in 2009. Since then, MSF has worked to upgrade Ahmad Shah Baba to a district hospital, strengthening the emergency department, maternity services, and treatment protocols, and increasing the medical services available so that fewer patients require referrals. In March, we completed our gradual handover to the Ministry of Public Health. Between 2009 and 2018, our teams conducted more than one million outpatient consultations, nearly half a million emergency room consultations and assisted over 124,000 births.

In 2019, we continued to deliver comprehensive emergency obstetric and neonatal care in the hospital in Dasht-e-Barchi, a neighborhood of more than one million people. We supported the maternity and neonatology departments, as well as the operating theater, and provided ante- and postnatal care and family planning. Other services included health promotion and psychosocial counseling for patients and their caregivers. During the year, our teams assisted nearly 16,000 births and admitted almost 1,500 newborns to the neonatal unit. We also supported maternity care in another public hospital in the area with staff, training, and essential drugs.

The hospital is the only facility for emergency and complicated deliveries in a neighborhood with a population of over one million. With nearly 16,000 deliveries in 2019, the Dasht-e-Barchi maternity wing was one of MSF’s largest maternal health projects. We continue to support maternity care in another hospital in the area with staff, training, and essential drugs. Learn how you can help in Afghanistan and other countries.

Since 2012, MSF has been running a dedicated 24-hour maternity hospital in Khost, eastern Afghanistan, providing a safe environment for women to give birth. The team assisted over 23,000 births in 2019. We estimate that this is nearly half the total births for Khost province, but after many years of seeing increasing numbers of women giving birth at the hospital, we are beginning to observe a plateau. MSF teams also continued their support to five health centers in outlying districts, increasing their capacity to manage normal births.

In 2019, we celebrated the 10th anniversary of our project in Boost provincial hospital, one of only three referral facilities in southern Afghanistan, where we work to support the Ministry of Public Health. The hospital is located in the capital of Helmand province, an area severely affected by active conflict and insecurity, with very few fully functional medical facilities. Our teams assisted over 18,000 births, performed more than 184,000 emergency room consultations and treated more than 87,000 children, nearly 4,000 of whom for severe acute malnutrition, one of the main causes of child mortality in the province. In 2019, we extended our training and bedside coaching activities with rural health care workers to improve early referral of complicated births and reduce maternal deaths related to late arrival at the hospital.

In 2018, an estimated 150,000 internally displaced people arrived in the city of Herat, having fled their conflict- and drought-affected villages. To respond to their needs, MSF opened a clinic on the outskirts of the city in December 2018, offering medical consultations, treatment for malnutrition, vaccinations, ante- and postnatal care and family planning. Over the course of 2019, MSF teams treated more than 44,000 patients, most of whom were children suffering from acute respiratory infections and watery diarrhea. We ended our support to the emergency department of Herat regional hospital, one of the largest health facilities in western Afghanistan, in late 2019. From October, we started running an inpatient therapeutic feeding center in the hospital’s pediatric department. Around 350 children were admitted between October and December. Please donate to support our work in Afghanistan and other countries around the world now.

Drug-resistant TB (DR-TB) is a major concern in Afghanistan, exacerbated by a lack of knowledge about the disease and poor availability of treatment. MSF has been supporting the health ministry in the diagnosis and treatment of DR-TB in Kandahar province since 2016, during which time 126 DR-TB patients have been enrolled in the program. In December, we introduced a nine-month oral regimen allowing DR-TB patients to change from injectable drugs to pills and reduce their number of consultations at the hospital. Thirteen patients were enrolled before the end of the year. We also continued to support the ministry in Mirwais regional hospital and at the provincial TB center, providing care for drug sensitive TB patients.

In 2019, due to increased awareness of our project, the number of patients attending the wound care clinic in Kunduz rose by almost 30 percent. Our team treated a total of 3,383 people and conducted 21,148 follow-up appointments. The clinic, which we opened in July 2017, treats stable patients with wounds from minor burns, trauma, previous surgery or diseases (such as diabetes) that cause chronic skin lesions. We also run a small stabilization clinic in Chardara district, west of Kunduz city, where we stabilized 3,177 patients in 2019. Construction of the new MSF trauma facility in Kunduz continued despite challenges linked to the weather and the security situation in the region.

What can I do to help in Afghanistan?

Join the MSF movement to help in Afghanistan and other countries 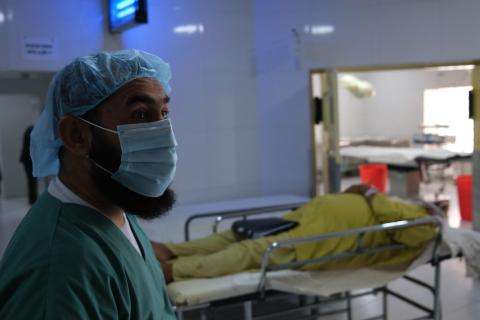 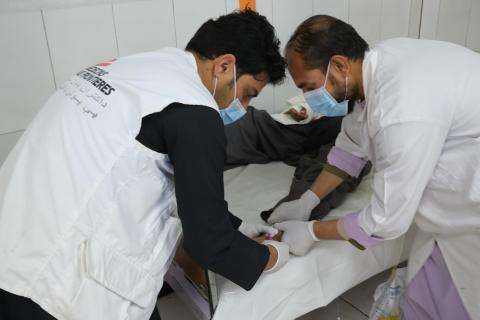 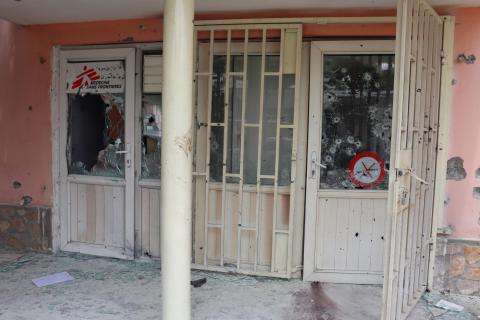 Afghanistan: One year after the massacre in a maternity ward