Haiti: Ten years after the earthquake

Where was the 2010 earthquake in Haiti?

On January 12, 2010, at 4:53 p.m., a magnitude 7.0 earthquake struck Haiti. It was the strongest quake to hit the region in over 200 years and its epicenter was just 10 miles outside Haiti’s capital city, Port-au-Prince. 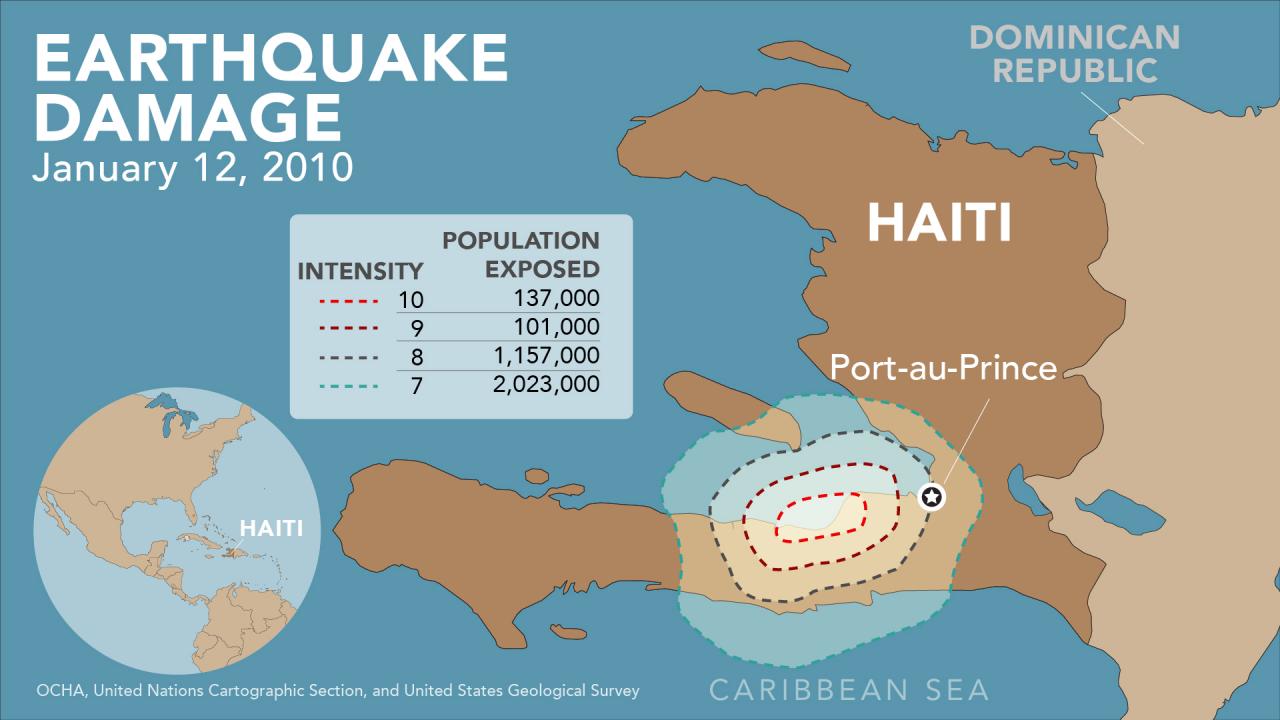 How many people died in the 2010 earthquake in Haiti?

The impact of the earthquake was staggering: According to various sources, 220,000-300,000 lost their lives. Many more were injured. Millions were suddenly homeless. The island nation’s infrastructure was decimated.

The immediate effects of the 2010 earthquake in Haiti

In a single day, 60 percent of Haiti’s already fragile health system was destroyed. Ten percent of the country's medical staff were either killed or left the country in the following weeks.

Because of our rapid-response logistical capacity, we were able to quickly send an additional 2,600 MSF staff members to provide lifesaving care throughout impacted areas.

In what would become one of our largest-ever emergency responses, we delivered nearly 1,200 metric tons of supplies—including everything from an inflatable hospital to medications, dialysis machines, and bandages—to Haiti in the first seven weeks after the earthquake.

Adapting to the needs in the years following the earthquake

But the response to the earthquake also brought its share of challenges. There were numerous accounts of foreign “experts” failing to take the needs of Haitian people into account, misuse of aid and local corruption, abuses by aid workers, funding promises not kept, and the introduction of cholera by United Nations peacekeeping forces.

MSF was not exempt. We struggled to launch some longer-term projects and had to close temporary projects to focus on emergencies in other parts of the world. At the same time, MSF addressed some specific unmet medical needs, such as emergency and trauma care, treatment of burn victims, responding to epidemics and natural disasters, and, until recently, emergency obstetric and maternal care. Doing so we moved many of our activities from temporary structures to more permanent ones.

In October 2010, barely 10 months after the earthquake, a cholera epidemic broke out north of Port-au-Prince. The disease rapidly spread to other parts of the country, including the capital. By the end of 2011, an estimated 520,000 people had contracted cholera and more than 7,000 people had died.

From 2010 to 2016 MSF treated more than 300,000 people with cholera symptoms in the country, with a peak in 2011 when we treated 170,000 patients in 50 facilities. After it was disclosed that cholera had been inadvertently brought to the island by a United Nations (UN) battalion from Nepal, many of the people affected by the disease requested certificates proving they had been treated in hopes of receiving compensation from the UN. In response, MSF set up dedicated teams to provide thousands of former patients with medical certificates.

Even before the earthquake, Haiti had one of the highest rates of maternal mortality in the western hemisphere. MSF’s emergency obstetric hospital in Port-au-Prince was damaged during the quake. After providing assistance to the Ministry of Health maternity hospital, Isaïe Jeanty, in 2011, MSF opened the Centre de Référence des Urgences Obstétricales, a hospital in Port-au-Prince for women with obstetric complications and newborns requiring specialized treatment. Before the hospital closed in July 2018, our teams cared for approximately 120,000 women and assisted more than 40,000 births.

In the South Department, MSF supports the Ministry of Health in the delivery of primary health care, focusing on mother-and-child care and treatment of waterborne diseases. MSF started supporting Port-à-Piment health center in October 2016. In 2019, we rehabilitated and started supporting two more health centers in Côteaux and Chardonnières. Based on the growing needs in this rural area, MSF will extend its support to six health centers and a referral hospital in the South Department in 2020.

Shortly after the earthquake, the number of patients with severe burns—a widespread problem in Haiti linked to poor housing conditions—increased. While burn victims were initially treated at the St. Louis inflatable hospital, these services were transferred to a semi-permanent structure near the Cité Soleil neighborhood in May 2011.

In 2018, MSF completed the construction of a new hospital in Drouillard, with better facilities designed for improved infection control, a major issue in burns treatment. In four years (until the end of November 2019), our teams cared for 2,614 people with burn injuries, at an average of 650 to 700 patients per year. Ninety percent of them came from the Port-au-Prince neighborhoods of Cité Soleil, Croix de Bouquets, Delmas, Martissant, and Carrefour. To this day, Drouillard is the only facility in Port-au-Prince specialized in caring for patients with severe burns.

Victims of sexual and gender-based violence

In May 2015, MSF opened Pran Men’m clinic (Haitian Creole for “take my hand”) in Port-au-Prince to provide medical and psychological care and guidance on social and legal support to victims of sexual and gender-based violence. We also support the Haitian Ministry of Health in the care of survivors at Haiti National University Hospital and Henri Border. Since 2015, our teams have supported more than 4,500 survivors of sexual violence.

On October 4, 2016, Hurricane Matthew hit Haiti. The category four hurricane—with winds up to 145 miles per hour—once caused widespread destruction. In the aftermath, MSF provided care to more than 6,000 people impacted by the storm and provided over 10 million liters of clean water to help prevent further cholera outbreaks.

Since July 2018, a deepening political and economic crisis has once again put access to health care in Haiti in jeopardy. While thousands of demonstrators have taken to the streets to protest skyrocketing prices of goods, a lack of economic opportunities, and government misuse of funds, the international community has mostly remained silent.

According to the World Bank, more than six million Haitians—about 60 percent of the population of the country—live below the poverty line on less than $2.41 (US) per day, and more than 2.5 million fall below the extreme poverty line of $1.23 per day. This means that most families struggle to buy food or pay for medicines or medical care.

The uncertainty and unrest have also led to an increase in violence. In the first two weeks after reopening our trauma center in Port-au-Prince, more than half of the patients we saw were victims of gunshot wounds.

In 2020, as the coronavirus pandemic hit Haiti, MSF converted its Drouillard burns hospital into a COVID-19 treatment center before returning it to its original purpose after the first wave passes.

Fall 2021: Responding to the Haiti earthquake

On August 14, 2021, a 7.2 magnitude earthquake rocked southwestern Haiti, centered about 80 miles west of the capital Port-au-Prince. The towns of Les Cayes, Camp-Perrin, and Torbeck were among the hardest hit. The disaster killed more than 2,200 people, injured more than 12,000, and left hundreds missing.

The quake decimated the area’s infrastructure, blocking roads and cutting many people off from essential services. More than 53,000 houses collapsed and many public buildings incurred significant damage, including 62 health facilities. MSF medics, logisticians, administrators, and more—many of whom were responding in their own communities—took action immediately.

The greatest number of deaths and injuries from the August earthquake occurred in the country’s southernmost region, in Sud department. Prior to the disaster, hospitals and clinics were already scarce in remote areas of Sud, and the earthquake damaged or destroyed many health facilities and roadways, making it difficult for earthquake survivors in rural areas to reach care quickly. 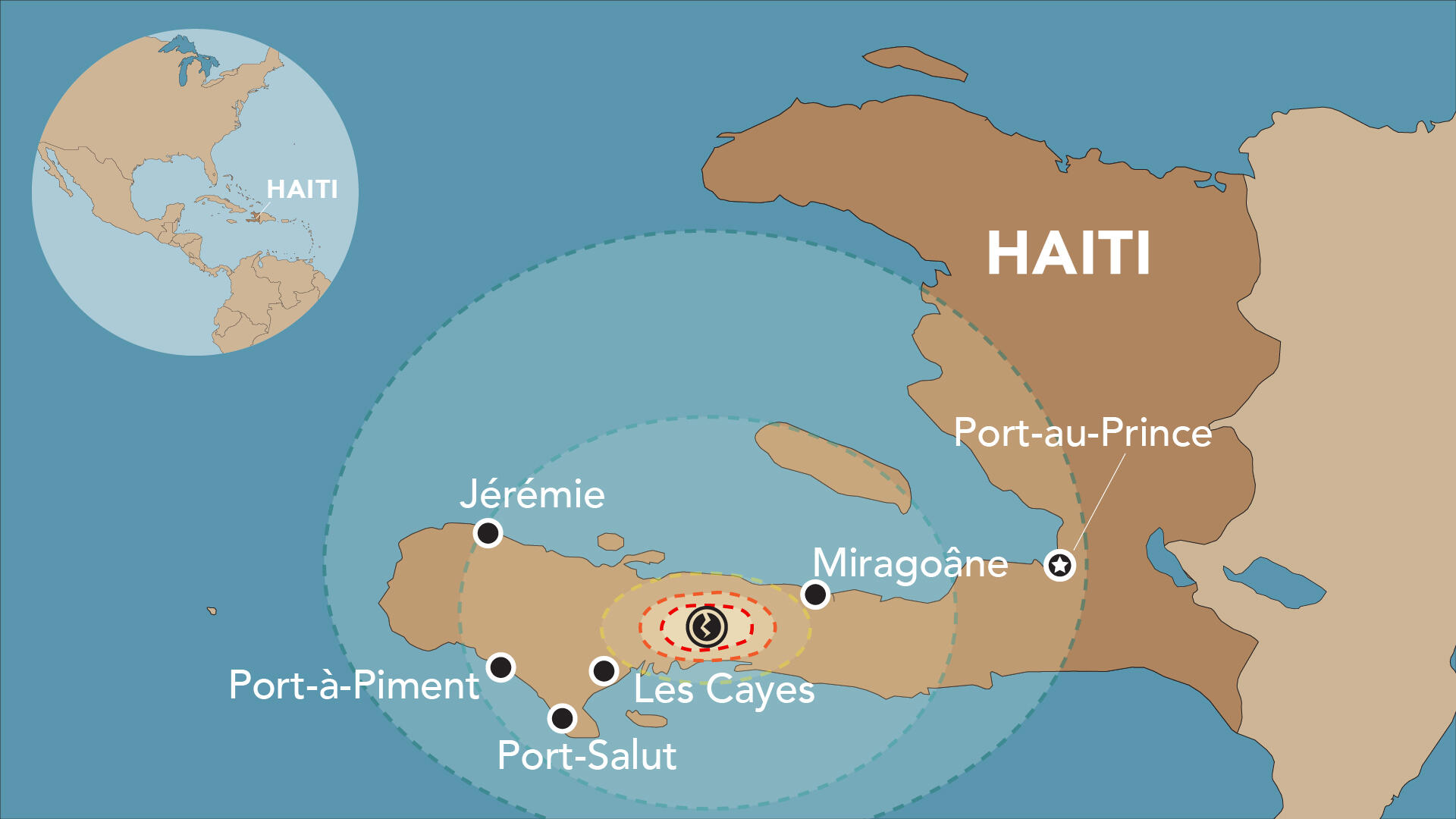 In addition to providing surgical, post-operative, and psychosocial care at local hospitals, MSF began running two to three mobile clinics per day to rural and remote areas severely affected by the earthquake. To travel to some areas, the teams used motorcycles or traveled on foot with donkeys to carry their supplies. Other areas were only accessible by air or sea.

In the first week, the mobile clinics saw nearly 1,000 patients. Patients in need of specialized care were transported to functioning medical facilities, such as HIC in Les Cayes, when possible. In addition to injuries from the earthquake and related wounds and infections, mobile clinic patients often presented with respiratory and vaginal infections, skin conditions, signs of malnutrition, and other illnesses associated with poor living conditions and a lack of clean water and hygiene facilities.

MSF has also worked alongside other organizations to improve access to clean water and sanitation in these communities. We have supported local health facilities with medical supplies and temporary structures since the earthquake.

Does Haiti have adequate health care?

Soaring prices have impacted the cost of medications and health access for Haitians, making it that much harder for people to get the care they need. Public and private medical facilities have also been badly impacted by the crisis. All of this has led to critical shortages of health care staff that have left Haiti’s health care system on the brink of collapse.

MSF began running two to three mobile clinics per day to rural and remote areas severely affected by the earthquake. To travel to some areas, the teams used motorcycles or traveled on foot with donkeys to carry their supplies. Other areas were only accessible by air or sea.

In the first week, the mobile clinics saw nearly 1,000 patients. Patients in need of specialized care were transported to functioning medical facilities, such as HIC in Les Cayes, when possible. In addition to injuries from the earthquake and related wounds and infections, mobile clinic patients often presented with respiratory and vaginal infections, skin conditions, signs of malnutrition, and other illnesses associated with poor living conditions and a lack of clean water and hygiene facilities.

MSF has also worked alongside other organizations to improve access to clean water and sanitation in these communities. We have supported local health facilities with medical supplies and temporary structures since the earthquake.

What MSF is doing to help provide medical care in Haiti

MSF has worked in Haiti since 1991 and we continually adapt our work according to the situation in the country. In response to the current crisis and growing humanitarian needs, MSF is stepping up operations in Haiti for the first time since Hurricane Matthew made landfall in 2016. In November 2019 we reopened our Tabarre trauma center in Port-au-Prince. In just a few weeks of operation, the trauma center admitted more patients than we anticipated, and our teams are now working to add more beds to provide lifesaving trauma care for more people. In the five weeks between November 25 and December 29, 574 patients came to the emergency room. One-hundred fifty people suffering from life-threatening injuries were admitted—57 percent of them had gunshot wounds.

In addition to the five structures we run or support, MSF has also reinforced its assistance to the Ministry of Health emergency department at Port-au-Prince's main hospital by organizing donations of medical equipment and material, rehabilitating facilities, and training staff. In order to improve maternal and neonatal care, we will soon support a referral hospital in the South Department.

Our teams have encountered numerous obstacles to reaching those in need of medical care. Staff and ambulances struggle to navigate streets that are regularly blocked by barricades of burning tires and cables.

In Greek reception centers, asylum seekers are stranded in prison-like...

"All I wish now is to feel safe": Stories from survivors rescued at se...

Survivors on board Geo Barents ship safely disembark in Italy after ha...