View Photo Lali Cambra/MSF
The Catholic church in Alindao houses about 15,000 people fleeing from violence in the city, which was considered an example of social cohesion before fighting exploded last month.
Lali Cambra/MSF
Click to hide Text

The conflict in Central African Republic (CAR) has escalated in recent weeks in several cities. The situation remains tense in Alindao, in the heart of the country, where an upsurge of fighting in May left at least 133 people dead and thousands more displaced. Last weekend, self-defense militia groups again attacked Alindao, attempting to take its airstrip and breaking into the Catholic mission where more than 15,000 people have taken shelter. Fighters from the self-defense groups also confronted members of the United Nations Multidimensional Integrated Stabilization Mission in the Central African Republic (MINUSCA). In the past two days, clashes have also occurred in villages near Alindao, about 20 kilometers (12 miles) away.

A Doctors Without Borders/Médecins Sans Frontières (MSF) emergency team has been working in Alindao for two weeks. The team supports the Alindao Hospital in the treatment of serious cases and war wounds, and also works with the health center located next to the Catholic mission. In addition to training medical staff to develop an emergency response plan in case of mass casualties, the team has started a vaccination campaign that aims to reach approximately 7,500 children in the area. 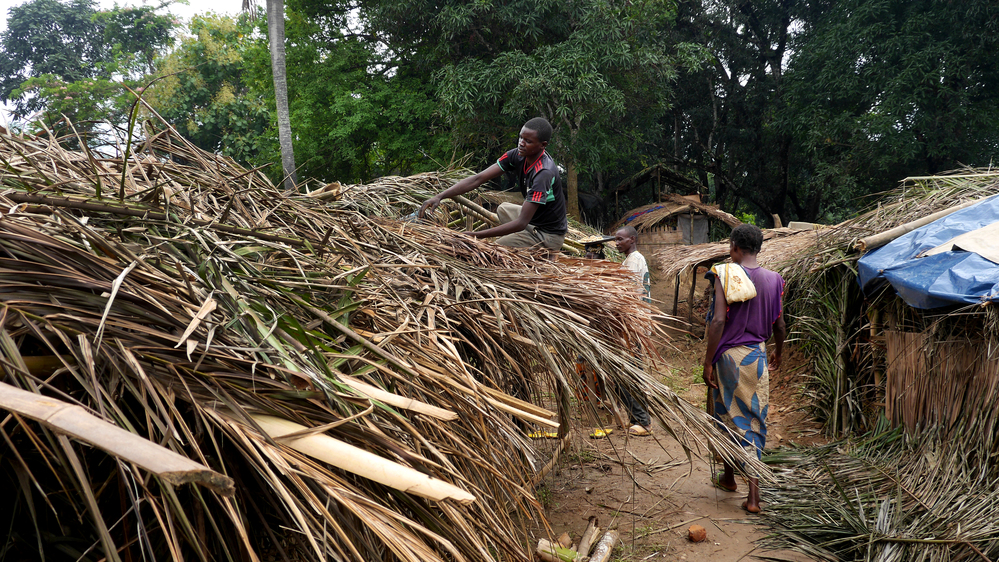 Alindao was once praised as a model city, with Banda and Yakoma Christians, Peuhl and Rounga Muslims, people of different ethnicities, religions, and language groups living in a quiet community of around 20,000. Community relations remained stable even when the Séléka coalition, composed of mostly Muslim armed groups from the north of the country, took control of the city and the country in 2013.

But on May 8, 2017, Alindao became the scene of fighting between Christian self-defense militias and the Muslim armed groups in control of the city. Alindao succumbed to the kind of inter-communal conflict that ravaged CAR in 2013 and 2014, and which is driving the latest surge of killings, executions, and the displacement of more than 100,000 people in the central and eastern parts of the country. Violence has engulfed the cities of Bangassou and Bria since early May, and now threatens to spread to Bambari as well. 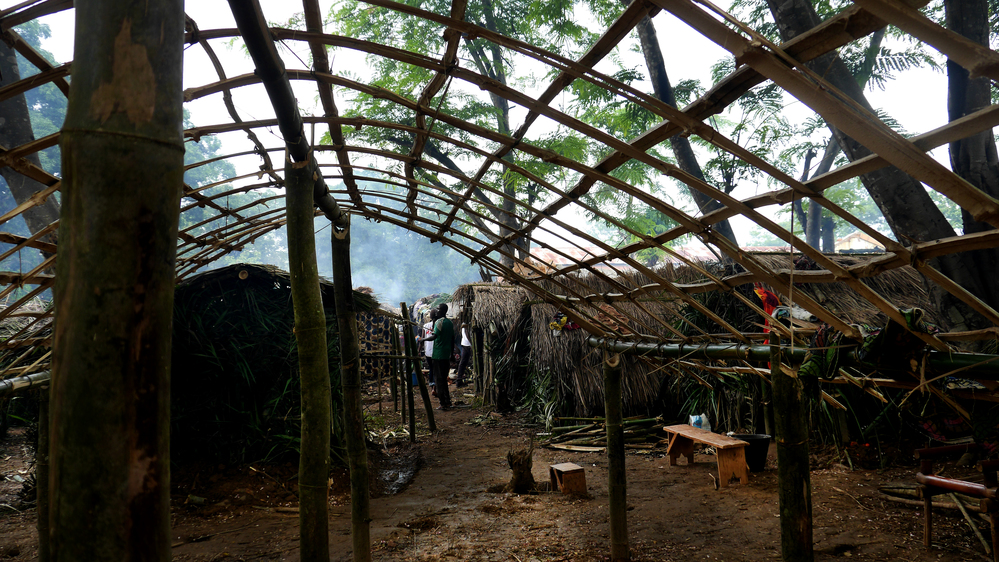 The recent escalation in violence in Alindao was triggered by a relatively minor incident: the arrest of two young men by Muslim combatants. This led to the killing of at least 133 civilians, entire neighborhoods being set alight, and the majority of the population fleeing to take refuge in the city’s Catholic mission.

“The two boys were accused of being in the self-defense groups,” explains Elisée R., 27, who lives in Alindao. He says a Christian self-defense militia retaliated by kidnapping the family of a member of the Séléka forces, who are mostly Muslim, in order to build pressure for the release of the two boys. Shootings began on May 7 and 8, he recalls. "On Tuesday [May 9], the situation worsened when they started with the civilian population. They told the women to leave their homes, and that they had nothing against them. Then they burned the houses. When I saw that they were starting to burn mine, I had to leave. They shot me in the shoulder, and I fell down. I played dead, that's how I survived.”

Paul A., an older man who estimates that he is “more than sixty,” fainted after being shot in the arm and the cheek. “We don’t know how many people died; they threw a lot of bodies into wells,” he says.

Those seeking refuge in the Catholic mission, which is being protected by the UN peacekeeping mission MINUSCA, do not know when they will be able to return to their neighborhoods. “There’s still a lot of fear, and it’s possible that the self-defense groups will want revenge,” says Elisée. “We won’t go back until there is peace in Alindao.” During the day, women can go to the camps and pick up food and firewood to sell to get by. Fearing attack, men do not dare leave the camp.

Violence has affected other towns in the area. The town of Seigneur, around 40 kilometers (25 miles) away, was attacked by an armed group on May 23. “All the houses were burnt,” says Germaine Y., 35. “The Catholic mission, the mosque, and four houses remain standing.” Germaine fears that her 17-year-old daughter, who was shot while fleeing, is dead. Her six-year-old son was shot in the leg.

Irene and her family also tried to flee the fighting. Her seven-year-old daughter now has a bullet in her side, close to her chest. Irene's mother-in-law was shot dead as the family ran through the market. Irene and her children took refuge in the woods, and five days later they arrived at Alindao Hospital.

“Yesterday I found out that my husband and my eldest son, who had stayed in the fields during the attack, were killed when they returned to the village to pick up the body of my mother-in-law,” she says. “I don’t know what will happen to us. We have nothing. We have nothing left.” 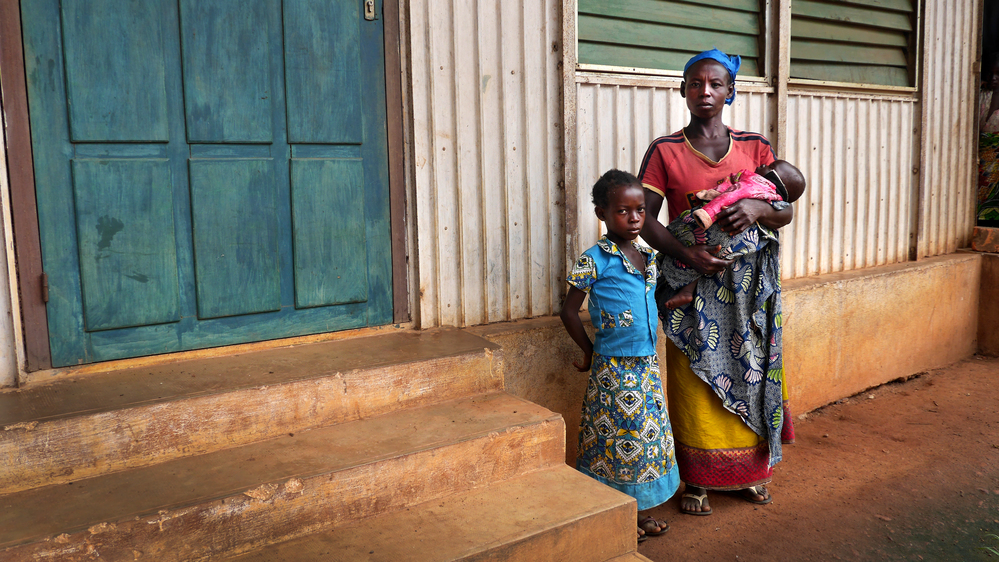 The fighting has taken an obvious toll on the thousands of displaced people, but spending days hiding in the forests also poses dire health risks: lack of food and water, malaria-carrying mosquitoes, and even snake bites.

“We knew that Seigneur was going to be attacked, and we ran out of there with nothing but the clothes we were wearing,” says Idriss A. “While I was running, a snake bit me. I thought it would be nothing, because it didn’t hurt. Afterwards, I started feeling heat and terrible pain. I held on for several days. When my brother saw that the wound was really bad, he decided it would be better for me to die in the village than in the woods.” 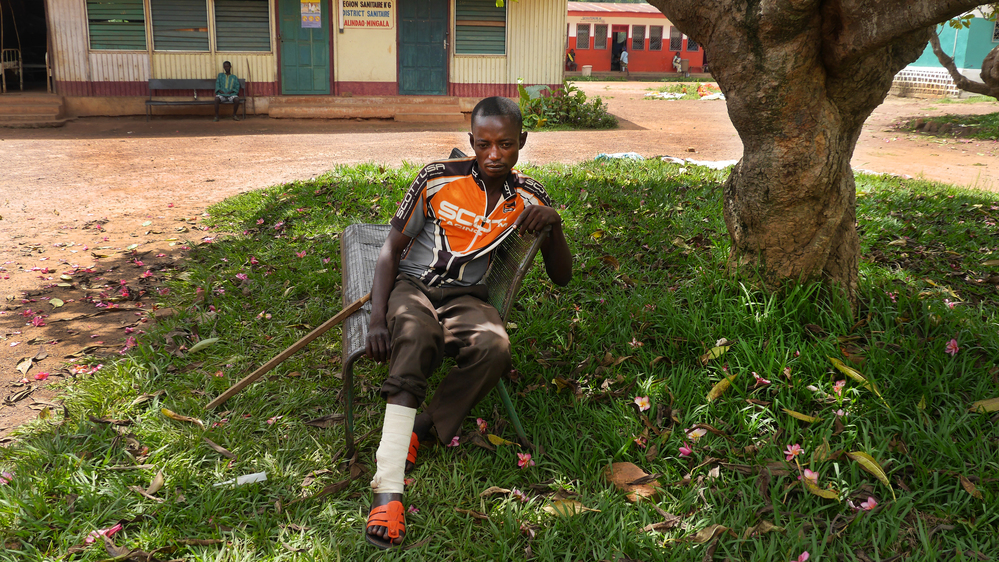 Doctors in the neighboring town of Odjo asked for money to cure the bite. Idriss instead resorted to traditional medicine, which didn’t work. When he finally arrived at Alindao Hospital, a large section of his calf was a festering open wound, eaten away by the infection.

An unfinished war with an uncertain disarmament process, slim chances of social reconciliation, and internal splits within the Séléka coalition all make it harder to end the violence.

Shifting alliances further complicate the situation. Members of the Front Populaire pour la Renaissance de Centrafrique (FPRC), a predominantly Muslim ex-Séléka faction, have joined with the mostly Christian self-defence or anti-balaka militias to attack their former allies of the Mouvement pour l’Unité et la Paix en Centrafrique (UPC), which includes Muslim Peuhl members of the Séléka coalition. Thousands of Muslim Peuhl civilians have been attacked and expelled from their villages. Many of them have arrived in Alindao.

Sadatu O., 38, fled Nzako with her five children when the population suffered an attack by the allied FPRC and anti-balaka forces. “We spent 22 days living in the woods, walking,” she says. “More than two hundred people left Nzako. Finally, the UPC generals brought us a truck and vans, which took us to Alindao. That was three months ago. Here, we have received the support of the community. My husband is in Bangui, and I hope to be reunited with him.” Unlike Sadatu, many members of the ethnic Peuhl community from Nzako, Bria, or Bambari are thinking of staying in Alindao.

Read More: “The Other People in the House Were Shot Dead"

Adamu G., a Peuhl man, was camping with his family and a group of around fifty people just outside Seigneur, on their way to Ippy to sell their herd of fifty cows. Anti-balaka fighters attacked them.

“I was in my hut. A man came up and started firing without saying a word,” says Adamu. He was shot six times in the head, groin, belly, side, and hand. After spending five days in the woods, he is now bedridden in Alindao Hospital. “My father, too old to run, is probably dead,” he says. “I’m sure my little brother, who is disabled, is dead too.” The rest of Adamu's family is still scattered.

Editor's Note: This article was modified for clarity on June 10, 2017.

Germaine, who was shot while fleeing the fighting in Seigneur, a town approximately 40 kilometers from Alindao, fears her older daughter is dead.
Lali Cambra/MSF