CAR: "Central Africa is in a state of health emergency"

Interview with Olivier Aubry, MSF head of mission in the Central African Republic

"The system seems to have broken down completely. It is hugely dysfunctional at every level." 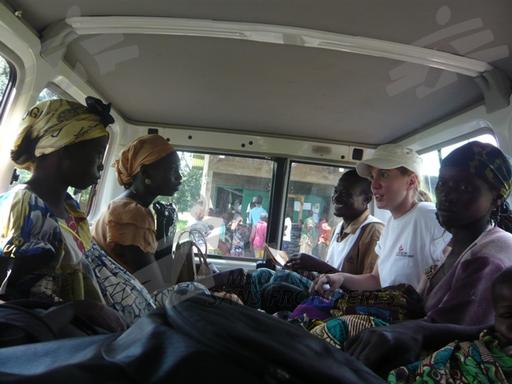 Patients are referred to the MSF hospital in Paoua.

What is the situation today in Central Africa following the signing of the peace accords and the disarmament, demobilization, and reintegration process that followed?

Since July 2011, nearly all of the armed opposition groups have signed the peace accords. However, some remain active—particularly an armed Chadian group based in the north of the country. Led by Abdel-Kader Baba Ladé, the Republic Popular Forces are not causing insecurity for now, but their presence on the border between the two countries does raise questions.

The east is very unstable. The country is virtually cut in half from east to west. Two rebel groups—the Convention for Patriots of Justice and Peace and the Union of Democratic Forces for Unity—are fighting over control of the diamond regions. Approximately 40 people died in the latest clashes in Bria [the capital city of the Haute-Kotto prefecture in the east]. Although the accords were signed last October, the region remains very volatile.

In the eastern part of the country, which is gripped by insecurity, access to certain areas is completely off-limits to humanitarian organizations, so it is difficult to obtain information on the situation facing that population. On the other hand, in the north and, specifically, in the Paoua region [in the northwest], where MSF has been working since 2006, the disarmament, demobilization and reintegration process has been underway since August 2011. There was no fighting in 2010. However, although the city of Paoua is under the control of the Central African Armed Forces and an administration has been established, the disappearance of the ARPD [the armed opposition group Armée Populaire pour la Restauration de la Démocratie] has created a void in security terms, so there are concerns.

"By the end of 2011, MSF could end up as the country's only supplier of anti-HIV and anti-tuberculosis treatment."

The APRD was, unquestionably, a rebel group, but it guaranteed a certain control in the region. Today, there are fears of recurrent insecurity because of highway robbers along certain routes and acts of banditry committed by former APRD fighters who may still be seeking satisfaction or whose income disappeared after demobilization.

What is the health situation in the country?

The health situation in Central Africa is extremely serious and has been for a long time. It was already very weak before the last coup d'état in 2003 and has only worsened since. The system seems to have broken down completely. It is hugely dysfunctional at every level. The Ministry of Health has virtually no presence outside the capital of Bangui. Few health facilities operate. The management committees, which oversee these facilities, are either non-existent or do not function.

As a result, access to care is very limited in certain regions, if it exists at all. The legislative framework is also lacking. Human resources are very limited and skills are rare. More than half the country's population is illiterate. The country has only a very small number of specialist physicians and the total number of doctors in the country is estimated at 300—for a population of approximately five million. Most of them are in Bangui.

A health system eroded by years of political-military instability, enormous structural problems, and insecurity throughout the entire eastern half of the country has created a catastrophic health situation and extremely limited access to basic medical care for the vast majority of the population.

MSF recently conducted several mortality surveys. What were the results and what conclusions can be drawn from them?

The study that Epicentre [MSF’s epidemiological research center] conducted in Carnot in the southwestern part of the country reveals mortality rates that greatly exceed emergency thresholds—both crude rates and among children under five years old. The rates are three or four times above the emergency threshold. The structural dysfunctions are such that we have reached a health crisis and state of emergency.

These studies and the statistics gathered in our health facilities suggest that the causes of this very high mortality are the typical illnesses, including malaria, respiratory infections, and diarrhea. However, it is difficult to believe that these simple factors could be the sole cause of such rates. Now, we wonder whether the dismantling of the health system produced this emergency situation or whether there is an underlying factor that we have not yet measured.

The situation is very serious in Carnot. The key question is whether the mortality rate may reach that level in other regions of the country.

What are the other aid groups in the country doing?

That is one of our major problems. Central Africa is currently in a phase that could be described as post-conflict. The transition between the emergency phase and the start of development is always a somewhat complicated period for emergency aid organizations like MSF.

The problem in the CAR is that there are no development actors that have invested in the country. So in this post-crisis period, organizations like MSF are facing development problems for which we have neither the expertise nor skill. We are thus somewhat lacking and have to take action, alone, in settings that we cannot necessarily handle. And we haven't managed to attract those development actors to take over from us, either.

What's more, as an additional complication for humanitarian organizations such as MSF, the situation remains volatile and these organizations all have their place in Central Africa, so we can't leave the country, either.

Where does MSF fit in the overall health picture?

If you consider all the projects carried out by MSF's three sections working in the country—France, Spain, and Holland—our budget is nearly equal to that of the Ministry of Health. So MSF is an important actor for the country's population and health system. We cover the northern part of the country with three hospitals that have a capacity of approximately 100 beds and we manage approximately 20 clinics across the country.

We are also providing HIV and tuberculosis treatment. In 2010, MSF conducted approximately 250,000 medical visits across all projects. This represents a very large volume of activity given the scale of the country.

How is HIV treated in our programs and what are the specific challenges in Central Africa?

The HIV situation in the CAR is very troubling today. Prevalence rates are both high and growing. The situation is nowhere near under control. The national program is having considerable difficulty getting established. The Global Fund To Fight AIDS, Tuberculosis, and Malaria, which supports it, froze its funds at the end of last year because of the national system's program dysfunctions and poor management of Global Fund resources.

We are very worried about the capacity of the national program to handle all the various elements of HIV treatment. MSF is thus developing vertical programs in a country where the national anti-AIDS program does not operate. The situation is identical with regard to treatment of tuberculosis and malaria. Recently, supplies of anti-tuberculosis treatments were unavailable for four months. This creates all kinds of problems in terms of drug resistance. For the last four months, MSF has been the only organization with anti-tuberculosis drug supplies in the country.

To round out the picture, the Global Fund also provides funding for malaria and there, too, we are seeing the same situation—very few actors in a country where the illness is taking a terrible toll.

Very few aid actors have mobilized in the face of these three illnesses—HIV, tuberculosis, and malaria—and the national programs are barely functioning. The government faces increasing uncertainty regarding funding possibilities. By the end of 2011, MSF could end up as the country's only supplier of anti-HIV and anti-tuberculosis treatment.