The financial transaction tax due to be discussed at this week's G20 Summit could help save millions of lives if a portion of it were put toward global health. 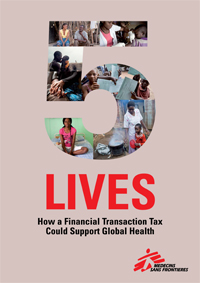 NEW YORK, OCTOBER 31, 2011—The financial transaction tax (FTT), due to be discussed at this week’s G20 Summit in Cannes, could help save millions of lives if a percentage were allocated to global health, according to Five Lives, an issue brief released by the international medical humanitarian organization Doctors Without Borders/Médecins Sans Frontières (MSF).
“We’ve seen through our work how key health interventions can change lives, as well as the trajectory of pressing health needs,” said Dr. Tido von Schoen-Angerer, executive director at MSF’s Access Campaign. “It’s time global health got its bailout.”
A tax implemented on just a European level would bring in an estimated US$81 billion/€57 billion per year. If G20 countries also implemented a tax, it would reap tens of billions of dollars more. Even a portion of that sum would be a significant boost to tackling global health crises. According to the World Health Organization, just an extra $1.5 billion is needed to properly prevent, diagnose, and treat tuberculosis in 2012, for example.
Funds could also serve to prevent a child from becoming severely malnourished; to protect children from deadly measles outbreaks; to prevent a baby from acquiring HIV at birth; to get people on lifesaving tuberculosis treatment sooner; or to save lives while dramatically reducing the spread of HIV through treatment.
“With governments scaling back foreign aid, there is no excuse not to allocate part of the funds raised from a financial transaction tax to health needs in developing countries,” said Sharonann Lynch, HIV/AIDS policy advisor for MSF’s Access Campaign. “A financial transaction tax would give us the predictable and sustainable funding source that is needed now more than ever.”
The idea of an FTT is gaining political traction at the very moment global health is showing the strains of reduced funding. Funding for HIV, for example, fell for the first time in 2009, and again in 2010. The Global Fund to Fight AIDS, TB and Malaria was forced to skip a year of grants for the first time in its history because of a severe financial shortfall. Funds from an FTT could help bridge the gap between what is needed and what has actually been given, and thus help countries diagnose more patients with TB, switch to better malaria protocols, or put more patients on HIV treatment.
Recent research shows that HIV treatment can also help prevent new infections. UNAIDS predicts that 7 million lives would be saved and 12 million new infections prevented by 2020 if treatment is dramatically expanded now.
“There are funding gaps across global health that could be plugged with money from a financial transaction tax,” said Lynch. “It’s time to invest in real lives—real futures.”
MSF’s issue brief, Five Lives: How a Financial Transaction Tax Could Support Global Health outlines through five personal stories the transformative impact an FTT allocation to global health could have. The brief is available here or at msfaccess.org.