As the Global Fund to Fight AIDS, Tuberculosis, and Malaria marks its tenth anniversary, people living with HIV/AIDS and those delivering treatment took to the streets in response to drastic funding shortfalls. 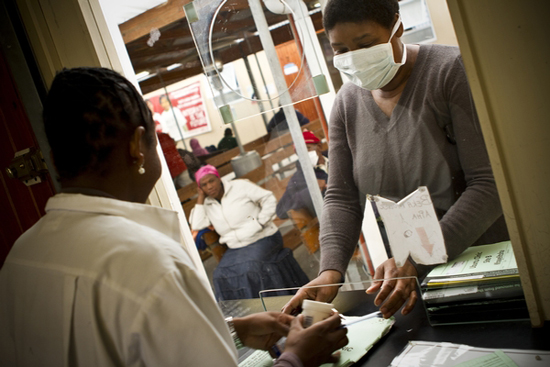 A woman receives antiretroviral medication at an MSF clinic in Cape Town. While MSF relies solely on private donors, a loss of funding from the Global Fund will leave thousands without treatment.

NAIROBI, JANUARY 30, 2012 - As the Global Fund to Fight AIDS, Tuberculosis, and Malaria marks its tenth anniversary—and on the heels of its leadership changes—people living with HIV/AIDS and those delivering and supporting HIV and TB treatment took to the streets as they warned that the political commitment made 10 years ago to address global health is evaporating, and that drastic funding shortfalls could cause an unraveling of a decade’s progress against the three diseases. The Global Fund Board in November took the unprecedented decision to cancel its eleventh round of funding because of a dramatic resource shortfall, and will not make grants for scale-up of HIV or drug-resistant TB treatment until 2014.

“Ten years ago, there was a landmark decision to support the roll out of HIV, TB, and malaria prevention and treatment in countries that couldn’t completely support programs on their own,” said Dr. Jennifer Cohn, of the international medical humanitarian organization Doctors Without Borders/Médecins Sans Frontières’s (MSF) Access Campaign in East Africa. “MSF has been part of the effort over the last decade to treat patients, introduce new treatments, and develop simple ways to deliver them. We have seen the positive impact of the Global Fund and other international health initiatives on individuals and communities, with deaths and sickness plummeting.”

The progress achieved is critical: nearly half of all people in need of HIV treatment in developing countries now have access, and in sub-Saharan Africa, treatment coverage increased by 30 percent in 2010 alone. MSF provides HIV treatment in 19 developing countries, and in at least eight of them, more than 80 percent of the people on HIV medicines receive them through programs funded by the Global Fund. The Global Fund’s cancellation of its latest funding round is especially detrimental at a time when scientific research has shown that HIV treatment itself can be a decisive tool for pushing back the pandemic: a person put on treatment earlier is 96 percent less likely to transmit the virus.

In several countries affected by HIV, plans to implement treatment strategies that have the biggest impact on the epidemic are at risk because of the funding crisis. In Malawi, for example, the government is attempting to find funding to pay for a plan to provide all HIV-positive pregnant women with life-long treatment. They have also been forced to put on hold plans to switch people to a newer World Health Organization–recommended treatment that has far fewer side effects.  In the Democratic Republic of Congo, where already only 15 percent of people in need have access to HIV treatment, waiting lists have grown and some clinics have had to close their doors as funding declines.

Two years ago in Uganda, a lack of funding forced serious delays in starting people on HIV treatment.

“I am gravely concerned that people living with HIV and TB in countries affected by these epidemics are being told to wait for another two years before they can get the treatment they urgently need today,” said Dr. Peter Mugyeni, in Uganda. “I don’t want to see a return of the situation we faced in Uganda two years ago, when we couldn’t give people the treatment they needed to stay alive because there wasn’t the money to pay for it.  If this happens again, it will again result in unnecessary deaths.”

TB will also be impacted. Although numbers of people with TB have been slowly falling since 2006, barely 10 percent of the global annual estimate of 440,000 new patients with multidrug-resistant tuberculosis (MDR-TB) receive treatment. Just as treatment expansion for MDR-TB seemed to be gaining momentum, the evaporation of political commitment is undermining the response.Enrolment of new patients on MDR-TB treatment will slow down in countries heavily reliant on the Global Fund.

“Pledges last week for funds from Japan and the Gates Foundation should serve as a wake-up call,” said Nelson Otwoma, National Coordinator of NEPHAK, Kenya’s largest network of people with HIV. “Now that it has new leadership, the Global Fund needs to hold an emergency donor conference so it can ensure countries can apply this year for grants to provide life-saving treatment to those with HIV, TB, and malaria. A Global Fund that is downsizing is a bitter pill to swallow. We’re beginning to see light at the end of the tunnel with the HIV epidemic, so now is not the time to shift into a lower gear.”

Countries such as Belgium, Denmark, the Netherlands, and the United States need to pay their full and outstanding pledges or reverse reductions in contributions, and recipient countries must also focus on increasing funding for critical diseases such as HIV and TB. A change from ad hoc voluntary funding to a more predictable mechanism—such as the financial transaction tax currently being debated in Europe—is needed, with part of funds generated to be dedicated to global health, including the Global Fund.