MSF has released a list of important stories that had an impact on people’s ability to access needed drugs, diagnostics, and vaccines in developing countries in 2011.

Geneva/New York, December 20, 2011—A list of "Ten Stories that Mattered in Access to Medicines in 2011" was released today by the international medical humanitarian organization Doctors Without Borders/Médecins Sans Frontières (MSF). The list looks at developments in 2011 that had an impact—whether positive or negative—on people’s ability to access needed drugs, diagnostics, and vaccines in developing countries. 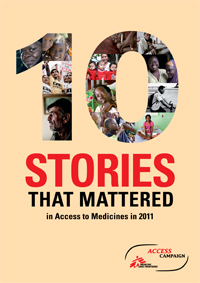 Access to Essential Medicines: Ten Stories That Mattered
in 2011

For the diseases our medical teams encounter every day in places where we work, 2011 was a year of both critical progress and dangerous backsliding,” said Dr. Tido von Schoen-Angerer, executive director of MSF’s Access Campaign.  “At a time of so much promise, it is crucial to continue pushing forward, and refuse to accept a double standard in care between rich and poor countries.

It also looks at key policy developments of the year, including unprecedented funding shortfalls at the Global Fund to Fight AIDS, Tuberculosis and Malaria; drug companies cutting across-the-board discounts in middle-income countries; and the continued struggle to ensure that affordable generic medicines can be produced in India, the ‘pharmacy of the developing world.