Tuberculosis and HIV patients in Myanmar are struggling to get lifesaving treatment as donors slash future funding. 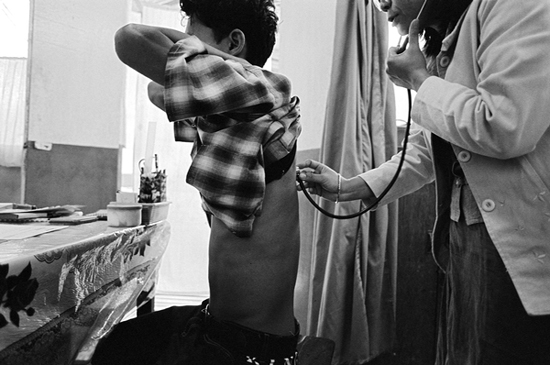 This young patient meets the WHO criteria for antiretroviral treatment, but is unable to receive it due to drug shortages and an overwhelming number of patients that are already sicker than he is.

Maung Myint, 38, holds his water bottle tightly as he takes frequent sips of its contents, liquid mixed with rehydration salts. He sits in a treatment room in a busy clinic run by Doctors Without Borders/Médecins Sans Frontières (MSF) in Myanmar.

“I used to make flip-flops, with a technique I inherited from my parents. They were experts in making flip-flops and football shoes. But then I started to get fever and diarrhea. That’s why I went to the government hospital and they gave me an HIV test, and I found out I was HIV positive.”

In addition to HIV, Maung Myint also has tuberculosis (TB), a common co-infection with HIV and the leading cause of death for people living with HIV. TB prevalence in Myanmar is nearly three times the global average, and Myanmar is among 27 countries with the highest Multi Drug Resistant TB (MDR-TB) rates in the world.

“MSF cannot yet provide me with ART, so I’m only taking anti-TB treatment. But it is not enough. Before I got sick I was very healthy—I really liked to run and play sports. But after I was infected I couldn’t do anything.”

An estimated 120,000 people living with HIV/AIDS in Myanmar are in need of lifesaving Antiretroviral Therapy (ART). In 2010, according to national estimates, fewer than 30,000 received it. MSF is the biggest provider of ART in the country, currently treating more than 23,000 people. With over 6,000 new patients to be enrolled in 2012, the limits of MSF’s capacity will be tested.

“When I found out I was HIV positive I was really sad and upset. I thought that there was no treatment for HIV. I thought I would die in one day.”

Faced with overwhelming numbers and few treatment options, MSF is forced to make impossible choices about who it can treat and who it can’t. In some areas, MSF staff is forced to turn away patients who should be on treatment, but who are not yet sick enough to qualify to receive medicine. Because of drug shortages, treatment is reserved for the very sickest.

“I really am sad that I can’t make flip-flops. I am an expert in making them and I can earn a lot of money from this, but I can’t do it anymore. So I have to ask others for help but I don’t want to. I hate the situation I’m in.”

Meanwhile MDR-TB is a serious and emerging threat. It has the same airborne transmission as non-resistant TB but is far more complex and time-consuming to treat,taking two years to treat compared to the usual six months for non-resistant TB patients. During that time MDR-TB patients also have to take a bigger cocktail of drugs and endure severe side effects.

Twenty-eight-year-old Ma Moe Moe had to travel for two days just to get tested for MDR-TB:

“I had to leave my children in my home town. It cost us 50,000 kyat ($73) to get here. The last year has been horrible, I was on continuous treatment for eight months—it was really painful [and] I had severe side effects from the tablets. It was all horrible."

Of an estimated 9,300 people newly infected with MDR-TB each year in Myanmar, just over 300 people have been receiving treatment. Ma Moe Moe is one of the lucky ones. She is now over the worst of her treatment’s side-effects.

“Now, I am really happy as my children are now with me again. Now my injection course is complete and I am reunited with my children. I am very happy."

As with non-resistant TB, perfectly healthy people can easily be infected with MDR-TB.

In November 2011, the Global Fund to Fight AIDS, TB, and Malaria cancelled its next round of funding, Round 11, which was due to start releasing funds in 2012. The loss of the anticipated funds for HIV and TB treatment is a tremendous blow to Myanmar, the least developed country in southeast Asia and a country that receives one of the smallest amounts of Official Development Aid in the world. Expected funds would have paid for 46,500 additional patients to receive ART, building on new momentum to tackle the health crisis and helping to bring total ART coverage close to 100,000 by 2018.

Without funding, tens of thousands of lives—the lives of people like Maung Myint—are hanging in the balance in Myanmar. The decisions donors now make are the difference between life and death for these people.

On 22 February 2012 MSF launched ”Lives in the Balance,” a report outlining the situation for people affected by HIV and TB, with a special focus on MDR-TB, in Myanmar today. It calls for urgent funding and assistance to be made available by the international donor community to help Myanmar close the devastating gap between people’s need and people’s access to treatment for HIV and TB.