How we’re helping in Iraq

Share in FacebookShare in TwitterShare in LinkedIn
What is happening in Iraq?
How we're helping in Iraq?
What can I do to help in Iraq?

Learn more about how we are responding to the coronavirus pandemic in Iraq.

What is happening in Iraq?

Although the conflict subsided in late 2017 and increasing numbers of displaced people returned to their areas of origin in 2018, significant barriers remain. Many displaced families lack the necessary documentation, properties, and livelihoods have been damaged if not destroyed, and security concerns persist in some areas. The context remains complex and unpredictable, due to ongoing political disputes, tribal conflicts, and attacks by armed groups.

How we're helping in Iraq

In 2018, Doctors Without Borders/Médecins Sans Frontières (MSF) continued to offer services ranging from basic health care and treatment for non-communicable diseases (NCDs) to maternity, pediatric and emergency care, surgery and mental health support, for displaced people, returnees and communities most affected by violence. We also rehabilitated and equipped hospitals and clinics in some of the most war-affected regions to help get the Iraqi health system back on its feet.

We continued to provide primary health care, treatment for NCDs and mental health services, including psychiatric care, in two camps for internally displaced persons (IDPs), handing over activities in the second half of the year as the camp populations gradually decreased and other organizations started providing medical services.

In April, we opened an outpatient clinic at Ramadi teaching hospital to treat patients with moderate and severe mental health disorders.

We also completed the rehabilitation of Imam Ali hospital’s emergency department, in Sadr city, with the installation of high-quality medical equipment and a new triage system, supplied 60,000 tablets of first-line medication to Iraq’s national tuberculosis (TB) program, and donated a GeneXpert machine to Rusafa chest and respiratory clinic to improve the detection of drug-resistant TB.

MSF teams offered treatment for NCDs, mental health support, and sexual reproductive health care in Jalawla and Sadiya primary health centers for families returning to the area, and in camps for displaced people in Khanaqin. We also ran health education sessions on chronic and endemic diseases, sexual and reproductive health, and psychological first aid. Learn how you can best help in Iraq and other countries.

We provide psychological, psychiatric, and psychosocial care in four different camps around Erbil, and to displaced people and host communities in Kalak. We reduced our activities in October as the camp populations declined, concentrating on moderate to severe mental health cases and treatment for NCDs.

As displaced people continued returning to Hawija, one of the areas most affected by conflict, our teams conducted almost 14,500 outpatient consultations, as well as treatment for NCDs and health education sessions in Al-Abassi and Hawija city. We also provided mental health care in Al-Abassi, and rehabilitated the water stations in Al-Shazera and Al-Abassi to ensure clean drinking water and prevent outbreaks of water-borne diseases.

We continued to run basic medical and mental health care in Daquq camp until it closed in September, and offered technical support and training at Hawija hospital in the emergency room, laboratory, and maternity department, and in infection prevention and control.

Several neighborhoods in Mosul still lie under piles of rubble, and thousands of people struggle to access basic services such as health care, water, and electricity. In 2018, we scaled up our medical activities in both east and west Mosul in response.

In Nablus, west Mosul, we ran a comprehensive maternity unit with surgical capacity for Caesarean sections, pediatric health care (including for newborns), stabilization and referrals for emergencies, and mental health services. Our teams assisted more than 5,300 normal deliveries, performed 1,117 Caesarean sections, and treated 34,530 patients in the emergency room.

In April, we opened a comprehensive post-operative care facility in east Mosul for patients with violent or accidental trauma injuries. The facility has a mobile operating theatre, a 20-bed inpatient ward, 11 recovery rooms, a mental health department, and a rehabilitation unit.

At the end of the year, we also completed the rehabilitation of Al-Salam hospital’s 24-hour emergency department, which now has two wards, a trauma room, a pharmacy, two consultation rooms, and a triage area. Please donate to support our work in Iraq and other countries around the world now.

South of Mosul, we provide emergency consultations, intensive care, treatment for burns, and mental health care for the resident and displaced population of Qayyarah sub-district and the surrounding area. Our 62-bed hospital has an inpatient department, a pediatric ward, and an inpatient therapeutic feeding center. As the health care needs of displaced people and those returning to the area continued to grow in 2018, we expanded our burns and neonatal activities and set up a second operating theatre. Our teams performed more than 18,000 emergency room consultations and almost 2,500 surgical interventions during the year.

We also started providing primary health care in Qayyarah Airstrip camp at the beginning of 2018, including outpatient treatment for malnutrition, mental health care, sexual and reproductive health services, and referrals. In July, we added a 24-hour emergency room.

In August, we completed the rehabilitation of Sinuni hospital, in Sinjar district, where medical activities were significantly limited during the conflict. It reopened with a fully equipped emergency room, maternity, inpatient pediatric ward, and mental health services.

For the first six months of the year, we conducted outpatient and mental health consultations for returnees and displaced people through our mobile clinics in Tikrit and managed a primary health care center in Al-Allam camp. Following a reduction in the number of displaced people and an increase in activities by other organizations, we handed over these activities to the Iraqi Department of Health in June.

After several cases of Crimean-Congo hemorrhagic fever were reported in different regions of Iraq, we rapidly deployed a team of experts to support hospitals. In July, 228 Iraqi doctors, nurses, and cleaners were trained in five public hospitals in Diwaniyah, Najaf, Babel, and Baghdad governorates.

We also supported the Department of Health to vaccinate more than 111,000 children aged six months to 15 years old in response to a measles outbreak in Ninewa governorate in July.

What can I do to help in Iraq?

Join the MSF movement to help in Iraq and other countries 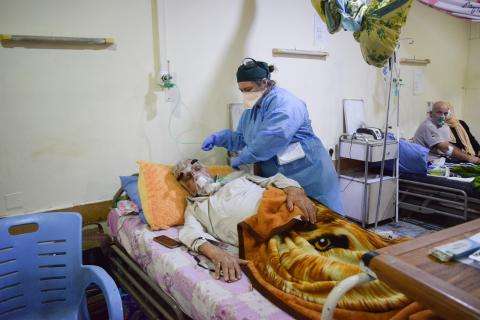 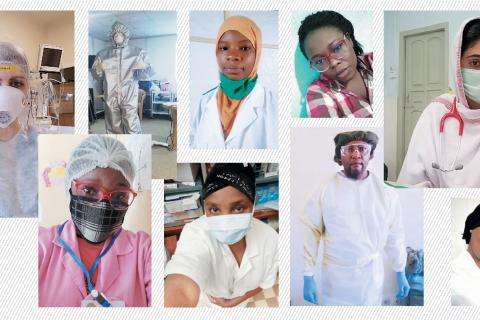 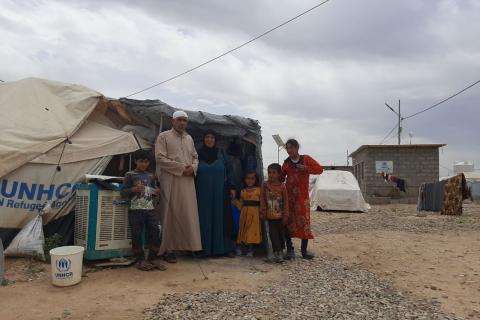