Our work in Cameroon

How MSF is fighting COVID-19 in Cameroon

The number of people with COVID-19 is increasing with the pandemic’s second wave. We are currently in discussion with the Ministry of Health on how to provide further support to the national response in Yaoundé.

In 2019, Doctors Without Borders/Médecins Sans Frontières (MSF) continued to assist displaced people, refugees, and vulnerable host communities in areas affected by conflict and violence in Cameroon.

What is happening in Cameroon?

Fighting intensified between government forces and secessionist groups in Southwest and Northwest regions, while violence and attacks by armed groups increased in bordering northeastern Nigeria, pushing thousands to flee across the border into the Far North region.

Civilians caught up in violence in Northwest and Southwest regions

The violence in Northwest and Southwest regions of Cameroon has displaced more than 700,000 people, according to the United Nations Office for the Coordination of Humanitarian Affairs (OCHA), and has hugely impacted the provision of health services in those regions. Learn how you can best help in Cameroon and other countries.

How we’re helping in Cameroon 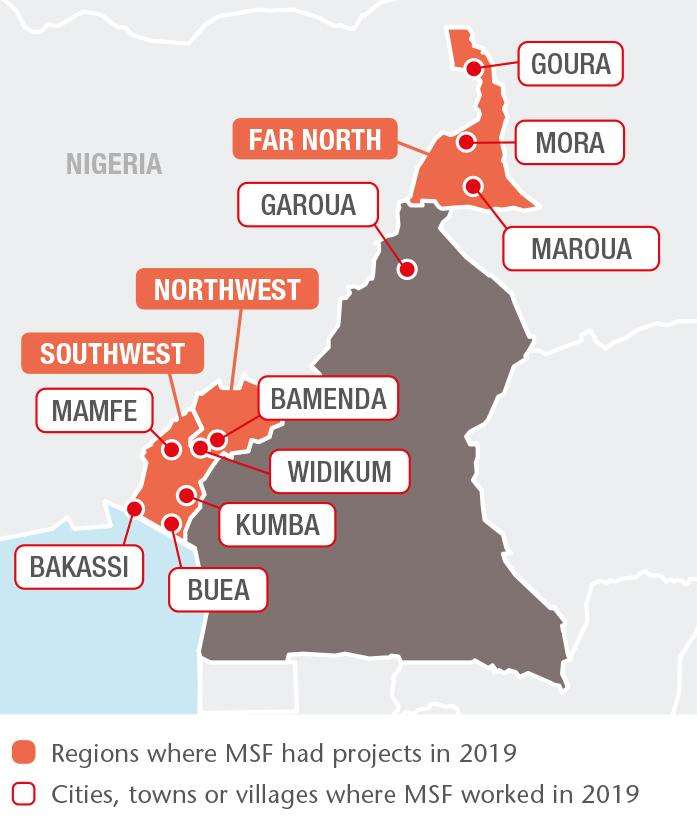 To improve access to care and respond to increasing needs, our teams supported around 30 hospitals and health centers in Bamenda, Widikum, Kumba, and Mamfe, and ran a free 24-hour ambulance service, which managed over 9,000 referrals throughout the year. The focus of our activities is emergency care, especially for victims of armed and sexual violence, children and pregnant women.

We also provided training to community health workers to conduct health promotion activities and treat simple cases of the most common diseases, such as malaria and diarrhea. Such community-based health support is key as many have fled to the bush, where they have no access to health care or other basic services. Please donate to support our work in Cameroon and other countries around the world now.

During the year, we provided close to 150,000 consultations through our community health workers, the majority being linked to malaria cases.

People in Cameroon’s Far North continue to suffer daily violence from the conflict, while also facing extreme poverty in a region subject to an unpredictable climate.

We have teams working in hospitals in Mora and Maroua, where they offer medical support, including nutritional care, mental health services, health promotion, and emergency surgery in the event of mass casualties.

Closer to the Nigerian border, our teams assist health centers with basic health care and hospital referrals. In 2019, we also trained over 40 community health workers in Kolofata and Limani to diagnose and treat simple cases of the most common childhood diseases and identify complicated cases to be referred to health centers or hospitals.

Early in the year, we provided emergency assistance in Goura to around 35,000 Nigerians who had fled across the border from Rann, following a violent attack by the opposition armed group.

During the year, our teams conducted around 75,000 consultations, 5,000 mental health consultations and 5,700 reproductive health consultations in our projects in the Far North regions. In addition, we treated more than 23,000 children for diseases such as malaria, diarrhea and malnutrition (in our facilities or within the communities), and performed 4,000 surgical interventions.

We continued to respond to an ongoing cholera outbreak in the North and Far North regions and also launched activities to tackle a new one on Bakassi peninsula, in the Southwest region. Our teams treated 260 patients for cholera and vaccinated more than 35,500 people against the disease. We also conducted epidemiological surveillance and health promotion.

In addition, we supported the response to a measles outbreak in Maroua, where we treated more than 1,300 patients in outpatient consultations and nearly 400 severe cases were admitted to the treatment center at Dougoi.

What can I do to help in Cameroon?

Join the MSF movement to help in Cameroon and other countries 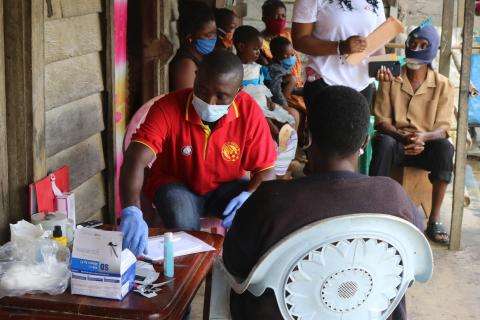 Cameroon: Community-based care is a lifeline for people affected by violence 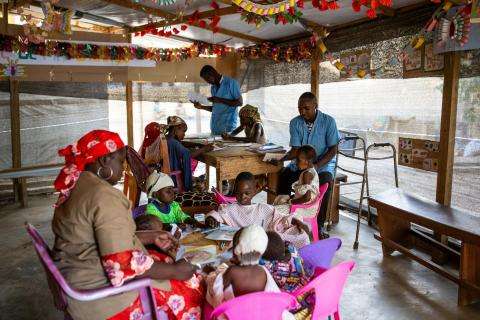